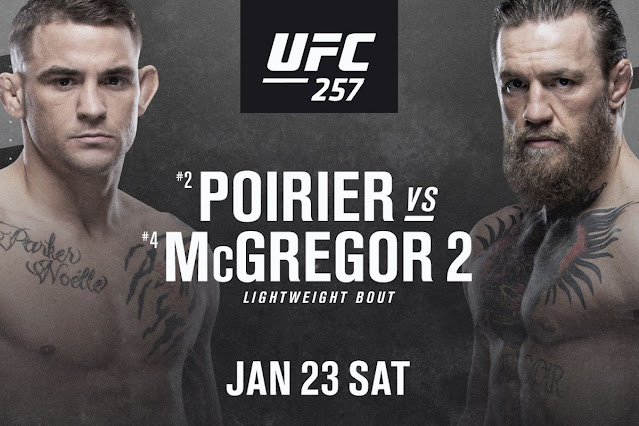 The UFC’s week-long trilogy of fight cards comes to an end this Saturday night with a blockbuster rematch in the lightweight division.

Pitting Dustin Poirier and Conor McGregor against each other, a weight class up and seven years on from their first meeting, the two strikers will look to rubber-stamp their name for any future title implications at UFC 257.

In chief support of the PPV main event, fellow lightweight contender Dan Hooker will welcome Michael Chandler to the promotion after leaving Bellator as their long-heralded 155 lbs king.

With a fun preliminary card that features intriguing match-ups and fighters like Movsar Evloev and Arman Tsarukyan, UFC 257 looks set to be one of the biggest events of 2021.

With both men having grown exponentially as fighters since their first meeting, I think the biggest factor of the change between then and now will be the lack of a truly draining weight cut and the effect that takes on their durability.

After their first bout ended in quick fashion, I simply don’t believe that the Poirier now could not weather the blow that put him down all those years ago.

In addition to his improved durability since that time, Poirier’s striking defence is much more refined. While he can still be hit and has been in a fair few wars recently, ‘The Diamond’ will parry, ride or see punches glimpse off of him as opposed to eating the full brunt.

For Poirier to win though, he’ll likely have to take this bout beyond the third round and when he does find success, he must pile on the pressure. McGregor’s trouble with his conditioning is well documented and when things start to go against him, I’m not sure his temperament allows him to rebound as Poirier can.

Getting into the later rounds however, is a monumental task against ‘The Notorious One’. The Irishman is perhaps the best starter at the elite level in MMA today and seemingly takes no time at all in establishing the range in which he wants to work at.

With his flashy kicks and electric hands, his power is prevalent in all of his striking arsenal and it can only take one accurate blow to spell the beginning of the end.

While I am very interested in seeing whether Poirier can find continued success with his oblique kicks to the body or whether he can draw counters and return fire on McGregor, I think the former double champion will get the job done.

His accuracy combined with his power is a lot for people to handle and with his ability to start in fifth gear, I think McGregor will find an opportunity to pounce should he find a staggering blow.

The fact this bout is three rounds as opposed to five is really interesting for Michael Chandler.

Accustomed to the full 25 minutes thanks to his Bellator success, I think the shortened time will be a negative effect on him and his adjustment to a rangy and tricky striker.

With few opponents the size of Hooker on his record and perhaps joining the UFC a few years too late to make a serious mark on the division, I just can’t see ‘Iron’ Mike getting off any sustained offence.

While his explosive striking could be a fight changer, Hooker’s feints, jabs and counter knees look to be a disastrous match-up for Chandler and with his added durability and submission threat, I think ‘The Hangman’ will win this fairly handily.

This is a tough call as both are remarkably inconsistent on which version of themselves turns up in the octagon.

Technically, this is Calderwood’s fight to lose. She is far more refined with her Muay Thai and the introduction of the flyweight division has allowed her to fight at a more natural weight.

Eye meanwhile has shown herself to be aggressive and has ground out wins in the UFC through clinch work.

While positioning in the clinch could be a major factor here, I think Calderwood simply has more about her as a fighter and she really should be winning this fight if she wants to keep any title aspirations.

Andrew Sanchez’s physicality has seen him pick up wins in the UFC whether it be through his takedowns or strikes but he has struggled with high output fighters or those with power of their own.

Makhmud Muradov has proven himself to nimble on the feet but his ability to jab and move combined with his own large frame should see him through here.

With a higher striking output and power of his own, I think ‘Mach’ will get the victory here.

This is a really interesting match-up between two developing fighters.

While Rodriguez has gone winless in her last two, she has shown improvements in rounding our her flaws, notably her takedown defence and work off of her back.

On the feet, Rodriguez throws a lot and can land stinging blows but Ribas isn’t too far behind in her own strikes landed per minute.

Where this fight could open up however is in how Ribas strings together her striking and grappling.

Ribas is happy to end combinations with takedowns and with a submission threat, I do think that’ll be decisive here.